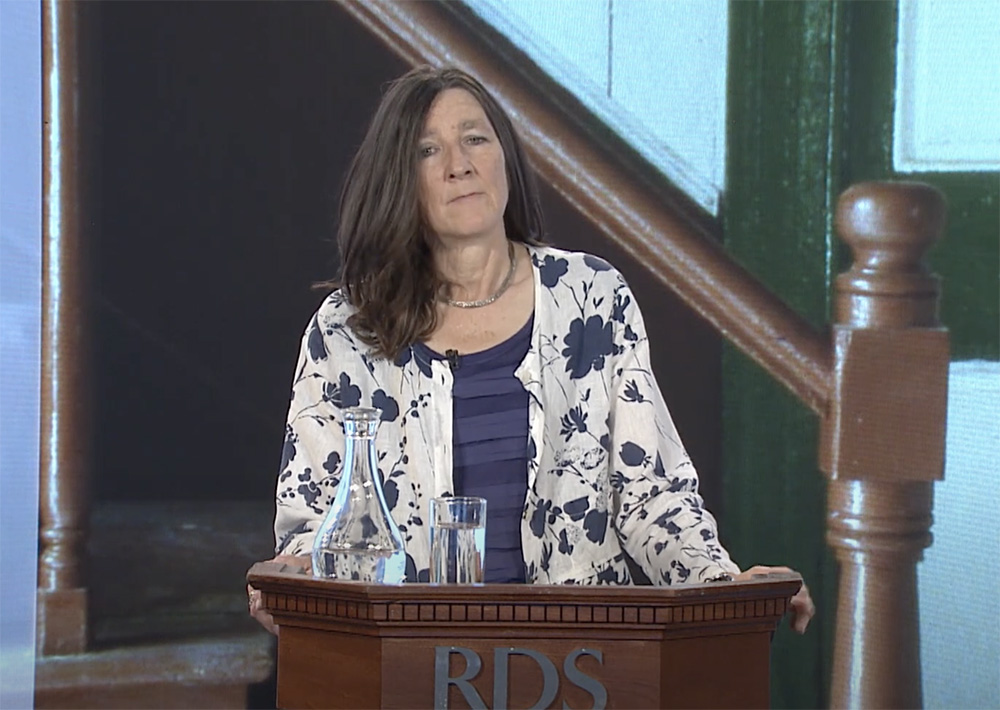 Dr. Claudia Kinmonth began working at Cork Public Museum in 2017, cataloguing The Jack Lynch Archive, and managing conservation for accreditation. Her two main publications for Yale University Press are Irish Country Furniture 1700-1950 (1993) and Irish Rural Interiors in Art (2006). In 2018 she won the Royal Dublin Society's Library & Archives Research Bursary, instigating research on 18th century recycling. Her Moore Institute Fellowship at N.U.I.G. is facilitating an enlarged edition of Irish Country Furniture (with Cork University Press), with fresh material on furnishings such as Noggins, horn spoons, earthenware and Gods in Bottles. She is a Member of the Royal Irish Academy.

Her choice of ten objects reflects the diversity within the museum’s collection, and her passion for objects that reveal interesting stories about the people that created or used them. Most of them, like Kinmoth’s forefathers and family, originated in or around Cork.

(Above) Model of Christ in bone, made by french prisoners at North Gate Bridge, 1798.

One of the most intrinsically impressive objects in the museum, probably dating from 1798, was made by French prisoners in Cork Gaol. The vitrine of pine frames a religious scene, beautifully cut from pieces of animal bone.

The details are so finely carved, that it’s hard to believe the maker(s) didn’t have access to piercing saws, files and drills. Less mysterious is the Catholic symbolism of the three figures inside, centered on the vivid and bloody crucifixion, flanked by women with shocked, sorrowful expressions and surrounded by the traditional symbols of Christ’s passion. All carved in brightly painted bone they include three dice, spears, a cockerel, a ladder, a suspended tassel and lantern and, significantly, a French tricolour. This is a sophisticated version of Ireland’s wooden, vernacular ‘god in a bottle’.

Diamonds, chevrons and mitred cross banding in patterned straw-work brightens all the wooden surfaces: a poor-man’s marquetry. Golden and iridescent on the inside where, protected from light, tiny silk curtains frame the scene. Skilful prisoners had time but limited materials. Bone was a by-product of their meagre diet, straw of their bedding. The museum has several other prisoner-made artefacts, including an Irish harp carved from a scapula bone.

This elegant two handled ‘loving cup’ is one of four items of rare ‘Republican silver’ in the museum’s collection. Underneath the cup, an engraving explains: ‘Made in Cork during the occupation of the city by the Republican forces in the Civil War 1922 Barry M. Egan.’

From June to September 1922 Cork was in the hands of anti-treaty Republicans, so normal transportation of silver between Cork and Dublin for testing before hallmarking became impossible. In response, William Egan and Sons, a family of firm of silversmiths, forged special Cork stamps, keeping local trade alive and hallmarking silver themselves. The cup is prominently stamped on the outside with a tower, the letters WE and a two-masted ship; imagery reflecting the city’s coat of arms. Egan’s destroyed their stamps after that brief period.

The loving cup in various forms has an ancient history, but at weddings was offered to the bride and groom to share, hence having two handles. The typically Irish mether or madder was another communal wooden drinking vessel, often with four handles. Like the loving cup, it was passed around and the contents merrily shared. Silver, like wood, has antimicrobial properties, so is especially appropriate for shared implements.

Shoe from the Cork International Exhibition 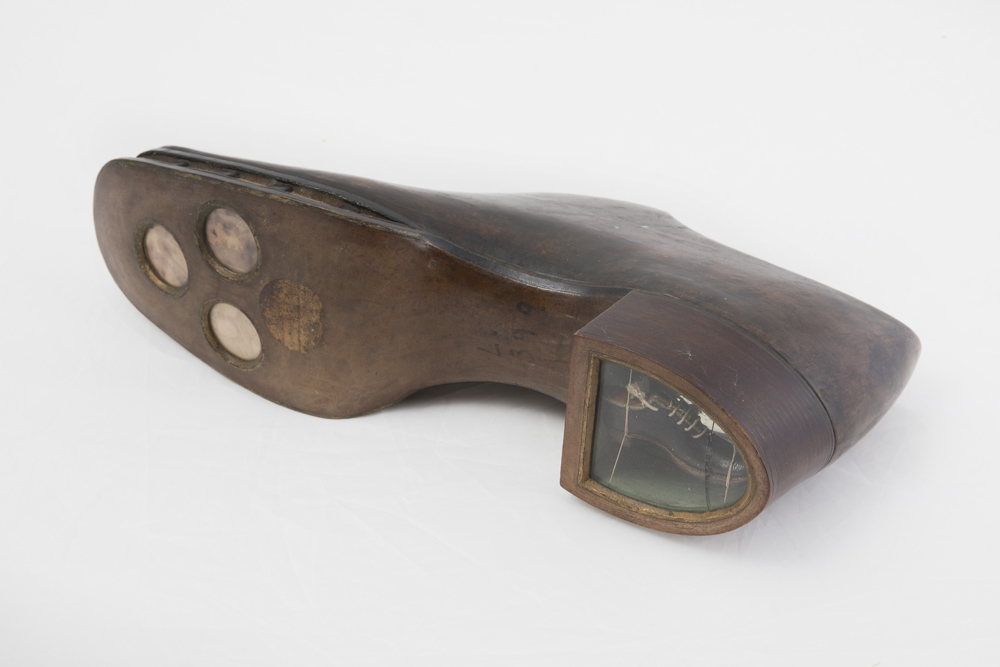 (Above) Boot made by John O'Brien, shoe maker for the Cork International Exhibition 1902.

This cunningly constructed boot was specially made to show off the maker’s skills, for the Cork International Exhibition of 1902-3. Inspired by London’s Great Exhibition of 1852, hundreds of manufacturers, inventors, educators and entertainers had stands showcasing their products and skills.

Today the resulting museum stands on the same Mardyke site, where Cork’s celebrated exhibition was held. The multitude of attractions, stalls and rides included a gigantic water chute and a switchback railway, while imposing purpose-built pavilions covered a huge riverside area. Among the museum’s related postcards and souvenirs, one of the most intricate and magical is this man’s boot, incorporating portraits of celebrities such as Nationalist Daniel O’Connell, within the sole. Yet more astonishing is the second tiny shoe suspended behind glass and reflected in mirrors inside the boot’s heel. A leaflet by its Cork manufacturer John O’Brien, emphasises local materials: the seamless upper of local calf skin, hand-sewn with 1,354 stitches of Irish flax, and the tiny stitches in the sole of the miniature one being 44 to the inch.

In 1902 when many rural people still went bare-foot or carried their shoes to and fro to be worn in church, this object had special significance.

(Above) The Garryduff Gold Bird.

One of the tiniest of the museum’s many thousands of objects is, in terms of archaeological significance and intrinsic value, one of the most important.

The diminutive bird apparently represents a wren: a far more common Irish bird then than now. Made from a thin dome of gold, surrounded by filigree edging, in appearance like a flattened rope, it has ten applied gold scrolls intertwining across its body. In the style of Iron Age La Tene, the little bird dates from about the 6th century, or later. A pair of hooks fixed by gold solder onto the back, seem to have attached it to a person’s clothing.

Excavated in 1945 by University College Cork’s then Professor of Archaeology, Michael J. Kelly, it is simply named after the sixth century ringfort where it was found. ‘Garryduff 1’ is one of two small, adjacent ring forts near Midleton, County Cork, where numerous tools for working glass and metal, and samples of imported earthenware were excavated. These artefacts, yet the absence of weapons, indicated a peaceful settlement of high status. Significantly, Prof. Kelly became the first curator of the museum in 1945, and the gold bird became the logo for The Cork Historical and Archaeological Society.

(Above) Porthole window from the RMS Lusitania.

The sinking of RMS Lusitania on 7 May 1915 was one of the greatest human tragedies of the early 20th century. Fast and luxurious, she carried 1,962 passengers along with cargo. Germany suspected she carried armaments, and, during World War 1, considered her a legitimate target. Her voyage from New York, towards Liverpool, took her into Irish waters, where U boats had sunk 23 boats within the previous week. When submarine U-20 torpedoed her below her waterline, she rapidly began listing to starboard, hindering the launch of sufficient lifeboats. Within a horrifying 18 minutes, the ship sank, with the loss of 1,198 lives. Boats rushed out from Cobh (then Queenstown) to rescue people clinging to wreckage in icy water and bring in the dead for identification.

Such loss of innocent passengers caused outrage and ultimately triggered the entry of America into the war. This porthole, with jagged shards of thick glass around the edges, is a reminder of the terrible violence of that event. Its hinges enabled someone to open it from the inside of a cabin, to let in air or improve the view. Among other items salvaged, the museum has a smaller window, and a prism; paradoxically all objects associated with vision, and evocative of life. 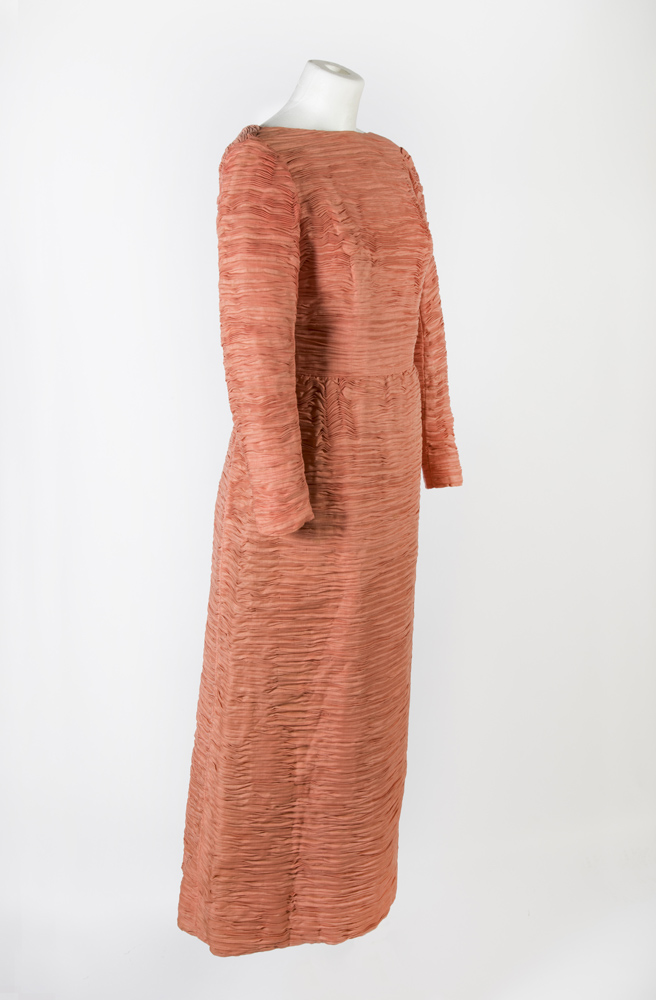 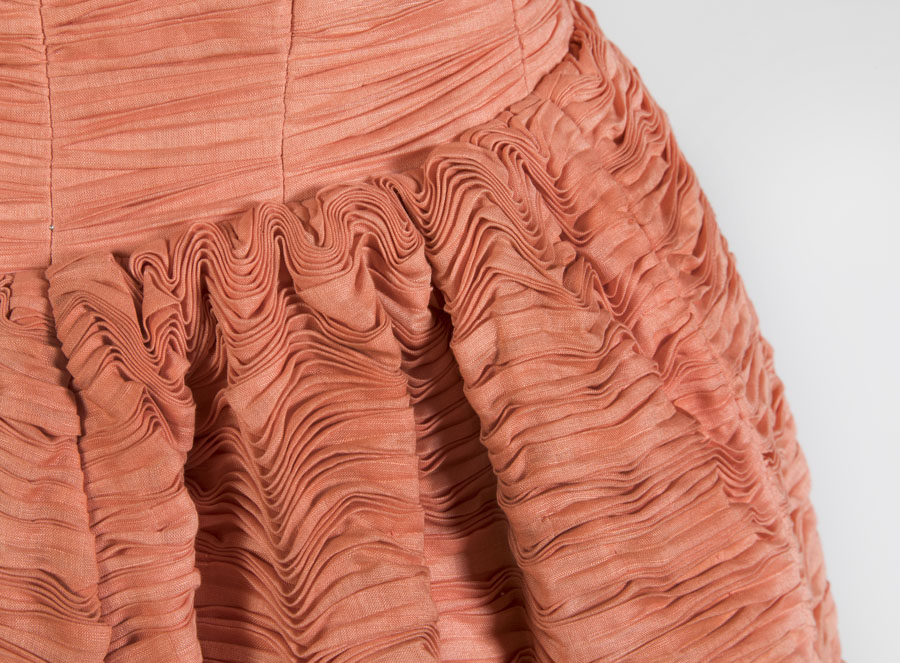 (Above) Evening dress designed by Sybil Connolly and (right), as worn by by Maureen Lynch.

Note the pleated detail of which was one of her defining hallmarks.

(Above) Maureen Lynch pictured in the Sybil Connolly dress at an awards ceremony of the Irish-American Fund, Rockerfeller Centre, New York.

As the wife of Jack Lynch, Ireland’s Taoíseach (from 1966-’73 and 1977-’79), Máirín Lynch (1916-2004) was smart in every sense of the word. Her contribution to Irish politics awaits research and is under appreciated. Upon marriage, Máirín gave up her job as a Civil Servant, accompanying her husband around the world and becoming his confidant. A self-appointed ambassador for Irish manufacturers, she wore haut couture by Ireland’s leading designers. She promoted the celebrated Dublin couturier and fashion icon, Sybil Connolly (1922-98) by wearing her exquisitely detailed linen ‘handkerchief dresses’ on state occasions. Jack Lynch referred to Connolly as ‘among Ireland’s National Treasures’.

Sybil Connolly never revealed the secret of how she created her famous silky soft dresses, made of the finest Irish ‘handkerchief linen’ incorporating hundreds of parallel folds. One salmon pink example in the museum’s collection is entirely hand stitched, with integral corsets and hidden pink zips at the waist and wrists. Photographs in the museum’s extensive Jack Lynch Archive, show Máirín wearing similar ‘handkerchief dresses’. This one she chose to wear when Connolly won a prestigious award in 1970 in New York. A portrait of style icon Jackie Kennedy Onassis shows her, as ‘First Lady’ wearing a Sybil Connolly dress.