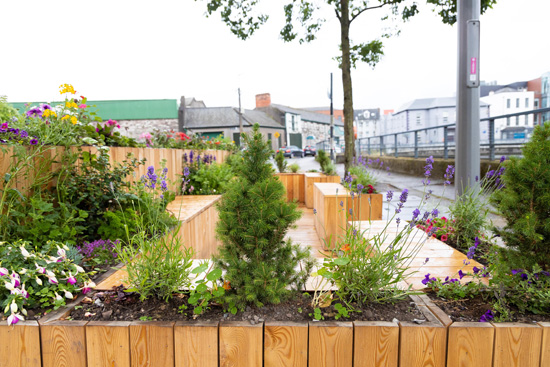 Following a call-out for “parklet partners” in September 2020, a number of local businesses and community associations were selected to take part in the National Transport Authority-funded scheme.  The parklets, designed by Siobhán Keogh Design and built by Benchspace Cork, are then planted and maintained by the “parklet partners”, with funding for their upkeep administered by the City Council.

The following parklets will be officially launched by the Lord Mayor on Tuesday 31st August:

A further three parklets will be launched on Thursday 2nd September:

In May of this year, Cork City Council announced that it was looking to provide up to six new parklets in the greater metropolitan area and the applications for these additional parklets are currently being assessed.

The Lord Mayor said: “The feedback to date is that there is a huge welcome for the parklets with every indication that they are being used on a daily basis by pedestrians. The success of the parklets is not possible without the dynamism and commitment of the partners. Their ‘hands on’ presence ensures that the parklets remain as vibrant oases of bio-diversity and a place of rest and recuperation in our busy City.”

The parklets have converted several on-street parking spaces into public open space and are a cost-effective way to create more vibrant streets, promote economic vitality, and provide an inviting green space for residents and passers-by to sit, relax, and interact.   Providing greening on the urban street and encouraging biodiversity are two key elements of the parklets project.

The intention is for planting is to be maintained in the parklets at all times, and the majority (if not all) of this planting should be “pollinator friendly”.