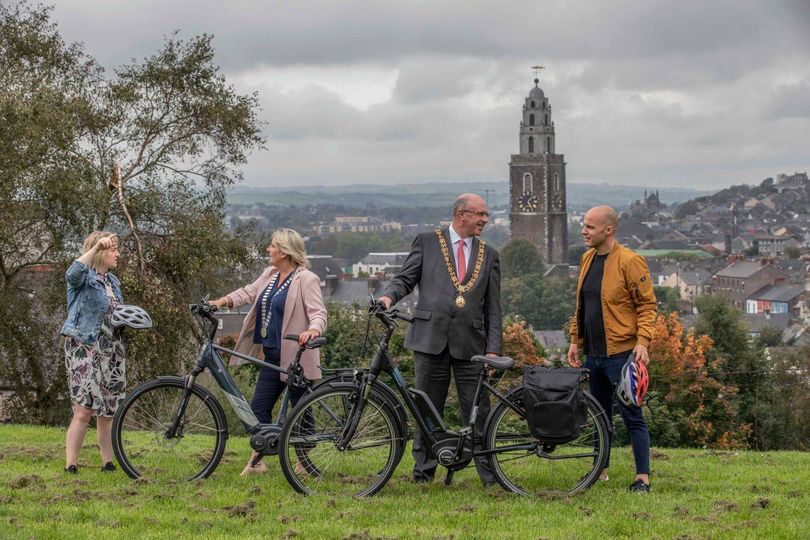 A new initiative promoting the use of e-bikes across Cork was launched this week by both city and county Mayors.

The Lord Mayor of Cork, Cllr Joe Kavanagh and Mayor of the County of Cork, Cllr Mary Linehen Foley, were on hand to launch the project, which is the first of its kind in Ireland. wE-BIKE is an initiative to promote electric bicycles as an everyday commuting option in Cork city and county, while displaying their economical and eco-friendly advantages.

A variety of e-bike purposes will be targeted during the wE-Bike initiative, which coincides with Cork Bike Week, running from Friday September 18 – 27. By extending the range and flattening the hills, e-bikes enable people to cycle over longer distances and hilly areas, and offer a healthier and far cheaper way to travel than your car. Areas such as work and school commutes, leisure trips, reintroduction to cycling for retirees, health benefits and more are just some of the social advantages that the project hopes to impart to Cork’s public; in addition to lowering congestion, pollution and carbon emissions.

Sales of e-bikes and bicycles have risen in Ireland since March, particularly during the recent lockdown period, which saw many people return to cycling in preference to cars when making local journeys. Despite this, three in four journeys in Ireland are still made by car even though more than half of all trips are less than 8km, according to recent data from the Central Statistics Office. Cork’s new e-bike campaign hopes to further the positive changes in attitudes.

Lord Mayor of Cork, Cllr Joe Kavanagh said: “People are becoming increasingly interested in e-bikes as they are a super way to keep us healthy,  reduce carbon emissions,  and not least, are a very pleasant way of getting around. Cork’s future is being built on sustainability and climate action so it’s great to see the city and county councils working together on this innovative initiative."

The e-bike initiative follows shortly after changes to the Cycle to Work Scheme, where there has been a rise from €1,000 to €1,250 for pedal bicycles and €1,500 for e-bikes respectively. The period of 5 years has also been reduced to 4 years, allowing people to apply for the scheme again every 4 years.

"Cork is home to beautiful sights and scenery and is the perfect county to experience while cycling," said Mayor of County Cork, Cllr Mary Linehan Foley. "This initiative encourages travel in a sustainable and environmentally friendly way, while reaping the benefits to health and wellbeing and enjoying our beautiful surroundings.” Sandy McGroarty, Coordinator of the Transport and Mobility Forum and we-bike Cork, who are one of the partners in the campaign, said: "We feel proud to be the first dedicated electric cycling advocacy group in Ireland and hope to inspire other counties to follow us in our pursuit to share the joy of electric cycling. We will have a virtual launch on International Car Free Day 22nd September as part of our online screening of Motherload and panel discussion."

e-bike battery technology has also developed considerably in recent times with most quality e-bikes today fitted with a Lithium-ion Battery. "In most bikes the battery can be unlocked  and removed by its owner for charging, but some do not," says Patrick Murray of City View Wheels in Cork, who have provided e-bikes for trial purposes to campaign advocates, Deirdre O'Shaughnessy and Stevie G. "If you do not have access to a power point where you store your bike, it is important to choose a model with a removable battery."

In another incentive for the public to move towards e-bikes, 27 Credit Unions in Cork are providing member owned financial services to help cover the costs of purchasing an e-bike. Additional equipment costs for the e-bike can also be covered with this loan. The we-bike Cork initiative features seven e-bike ambassadors located throughout the city and county whose lives have been transformed by e-bikes. To find out more about their stories, visit we-bike.ie