Father Gleason's Letter to the Mother of Christy Barry 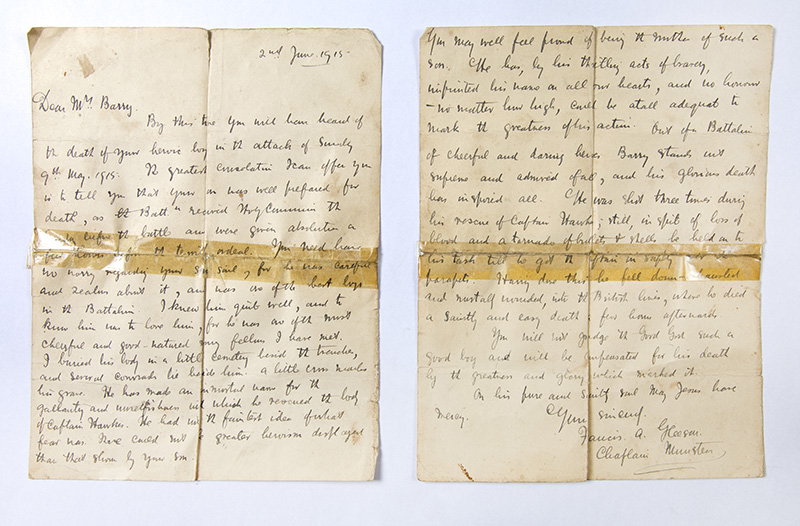 (Above) Chaplin to the Royal Munster Fusiliers, Father Gleason's letter to the Mother of Christy Barry, dated 2nd June 1915

Father Francis Gleeson was born in Templemore, County Tipperary in 1884. He was ordained as a Roman Catholic priest in 1910 and spent the years before the outbreak of war, working in the Archdiocese of Dublin. At the beginning of the war, Father Gleeson enlisted and served as Chaplain to the 2nd Battalion, Royal Munster Fusiliers. He was dedicated to serving this battalion on the Western Front and was present at several battles, where he provided religious solace and absolution for the soldiers under his care. The sacramental needs of soldiers on the frontline meant chaplains like Father Gleeson were often forced to put themselves in life-threatening positions to administer sacramental absolution to dying or injured soldiers. The concern for the wellbeing of the soldiers overshadowed any concern for their own personal safety and this made chaplains important and influential figures with the men they served with. One of the many responsibilities of a chaplain was to administer General Absolution to soldiers before they went into battle.  This was meant to absolve the men of any past transgressions or mortal sins before their potential death on the battlefield. Father Gleeson himself is depicted administering the general absolution in one of the most famous paintings of the war - The Last General Absolution of the Munsters at Rue du Bois by Fortunino Matania. This image captures Father Gleeson atop his horse, praying for the souls of the soldiers of the Royal Munster Fusiliers gathered around him on the Rue du Bois on the evening of 8 May 1915. The following day saw the 2nd Battalion suffer devastating losses in the Battle of Aubers Ridge. In fact, it is believed the British Army lost about 11,000 men during this battle. 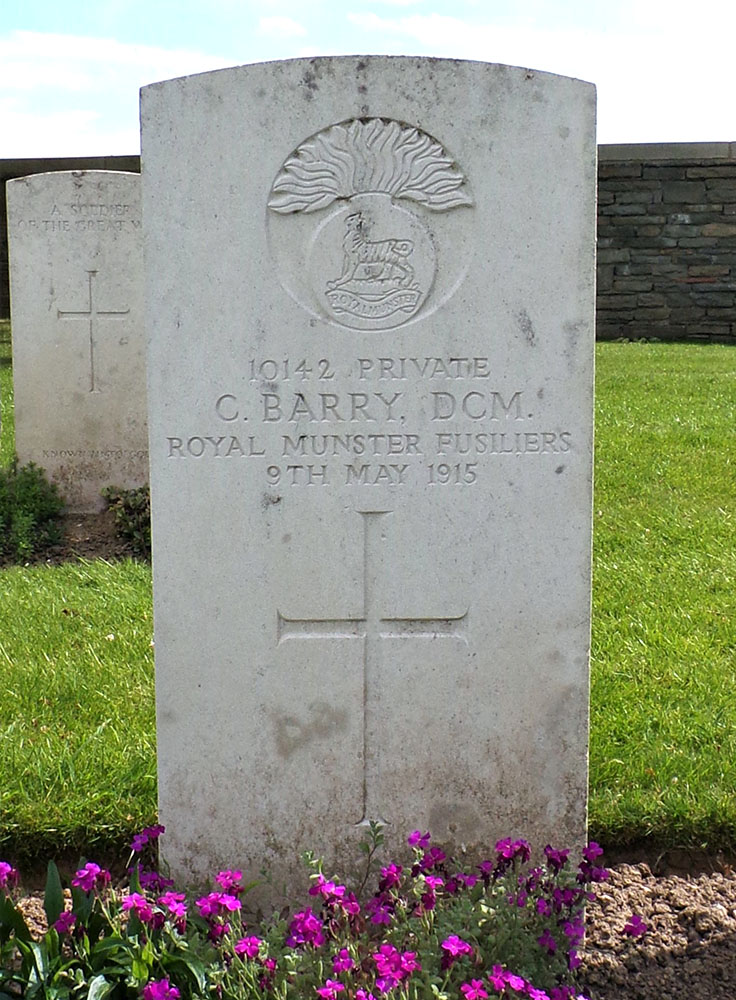 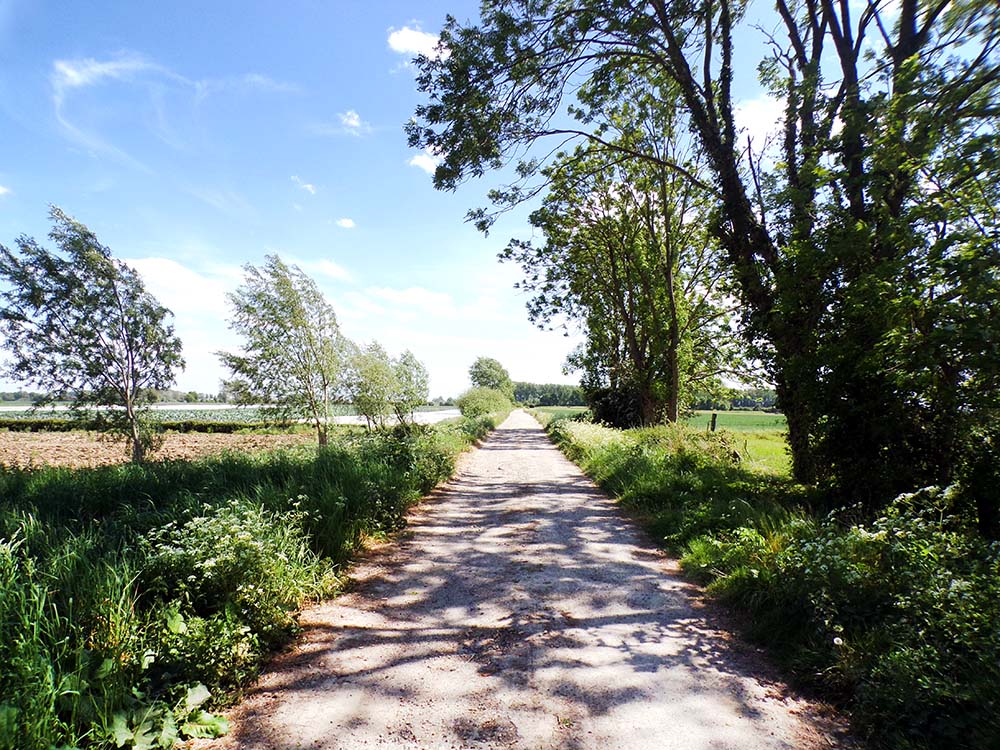 (Above Right) The Cinder Track

One of the soldiers killed at Aubers Ridge was Private Christy Barry. A native of Cork City, Barry was shot while saving his wounded commanding officer, Captain Maunsell Hawkes, from no-man’s land. He left behind his mother and younger siblings at 86 Douglas Street, Cork City, who were dependent on the wages he made serving in the army. He was only twenty years old at the time of his death. Barry was one of the almost 400 Royal Munster Fusiliers to be wounded, killed or captured that day. Father Gleeson made it his mission to write to the families of the men who died, explaining the circumstances of their death and offering words of comfort for their loss. Father Gleeson wrote one such letter to the mother of Christy Barry on 2 June  1915. In the letter, now housed at Cork Public Museum, Father Gleeson made assurances to Mrs Barry that Christy’s soul was well cared for before he died and his body was cared for after his death. It is clear that Father Gleeson cared for the soldiers and their families stating in the letter that he ‘knew him (Christy) quite well, and to know him was to love him, for he was one of the most cheerful and good-natured young fellows’. His commitment to the Royal Munster fusiliers resounds in this letter as he emphatically praises Barry’s courage and heroism. 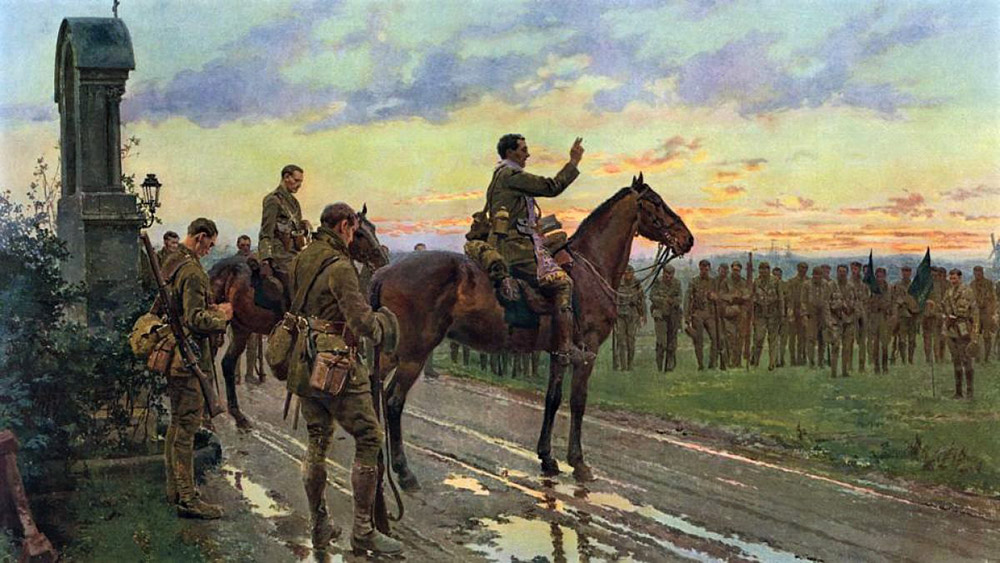 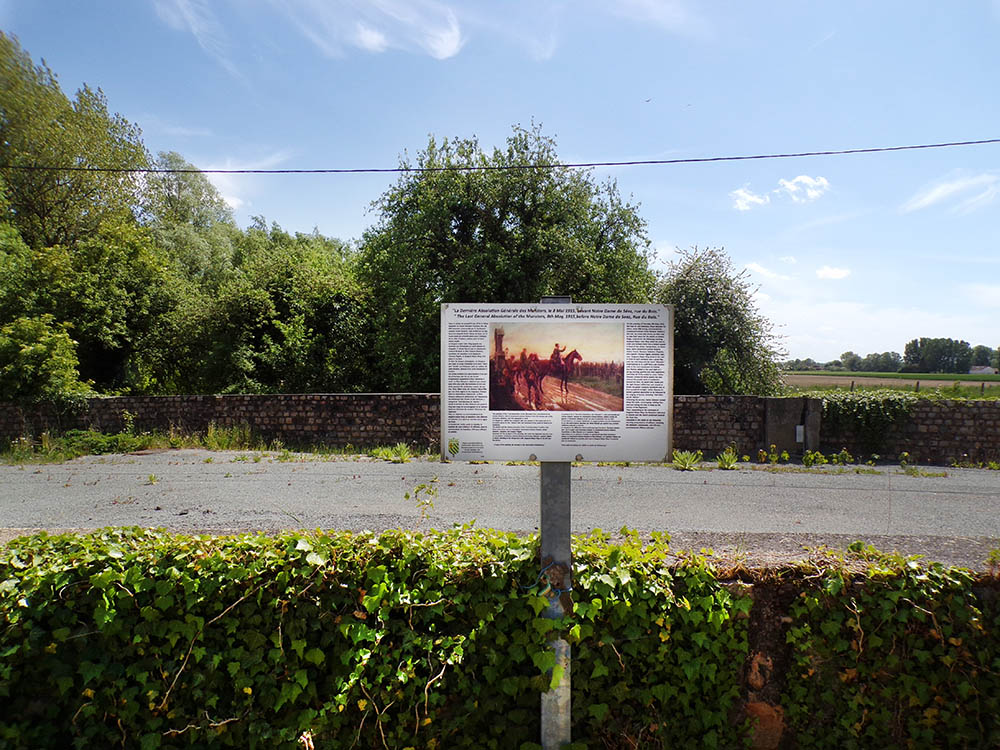 (Above Left) The Last Absolution of The Munsters by Fortunino Mantania

(Above Right) As the site is marked today

The function of chaplains like Father Francis Gleeson, was to relieve the anxieties concerning the salvation of the soldiers who took part in one of the greatest and bloodiest wars of the 20th century. His presence assured servicemen that amid the terror, God had not abandoned them. 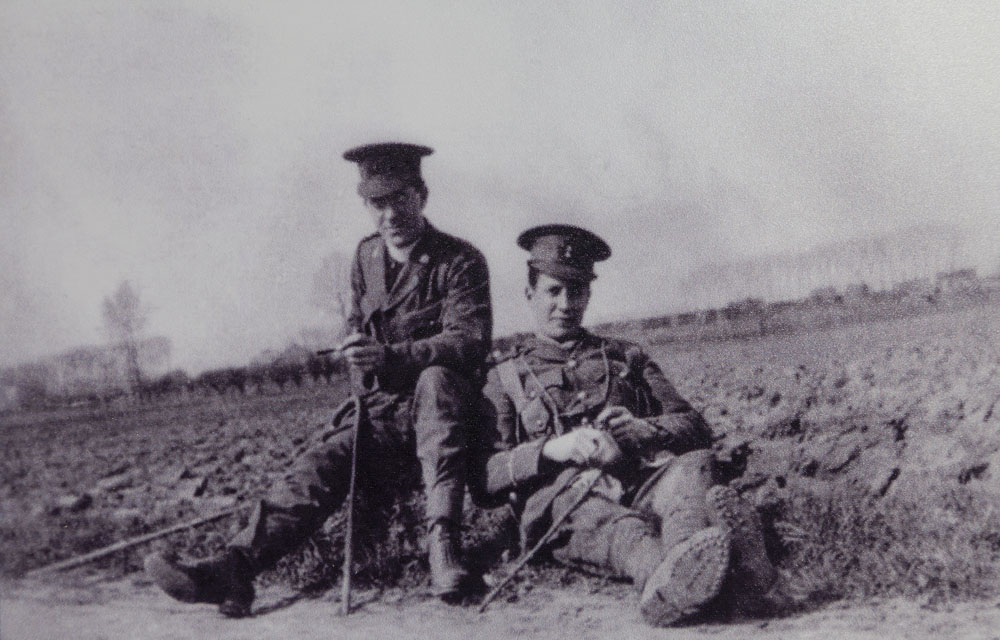 For more information and objects regarding Christy Barry, be sure to check out our resources section

Special thanks to Ciara Morrisroe, student of 2021 MA Museum Studies - Archaeology Department UCC for her research on this object. Thanks to Gerry White for helping edit this piece.