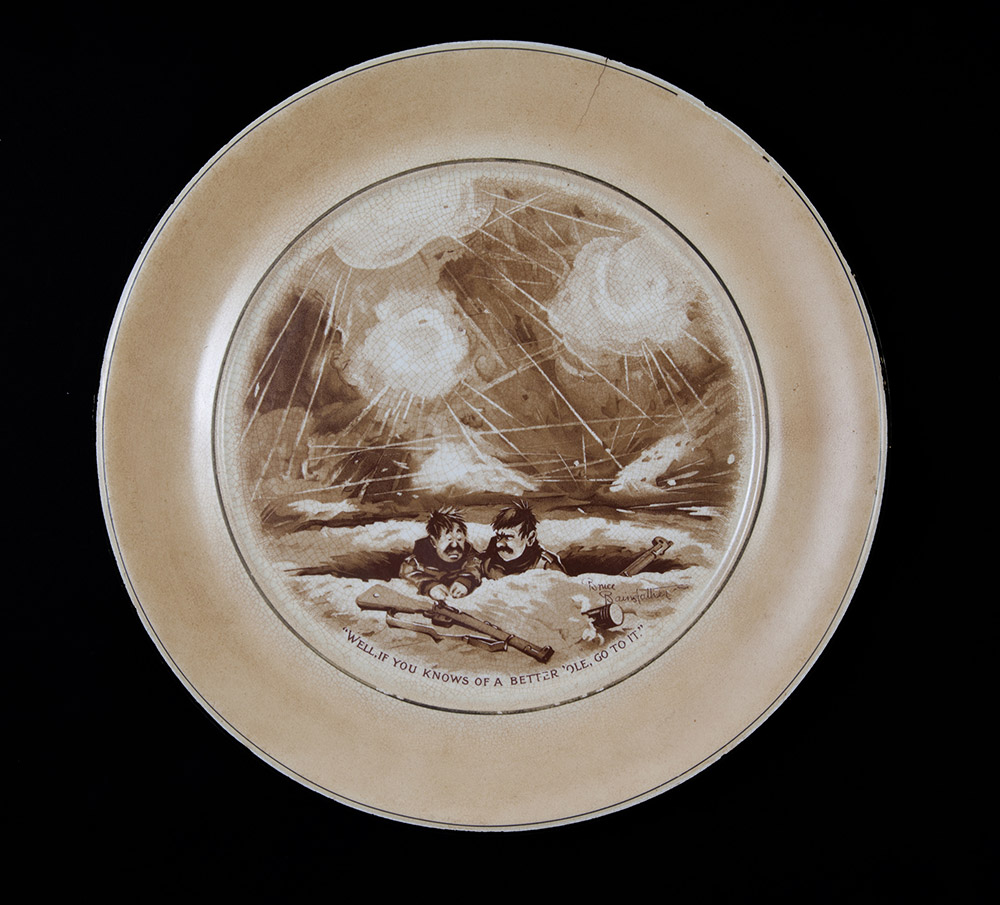 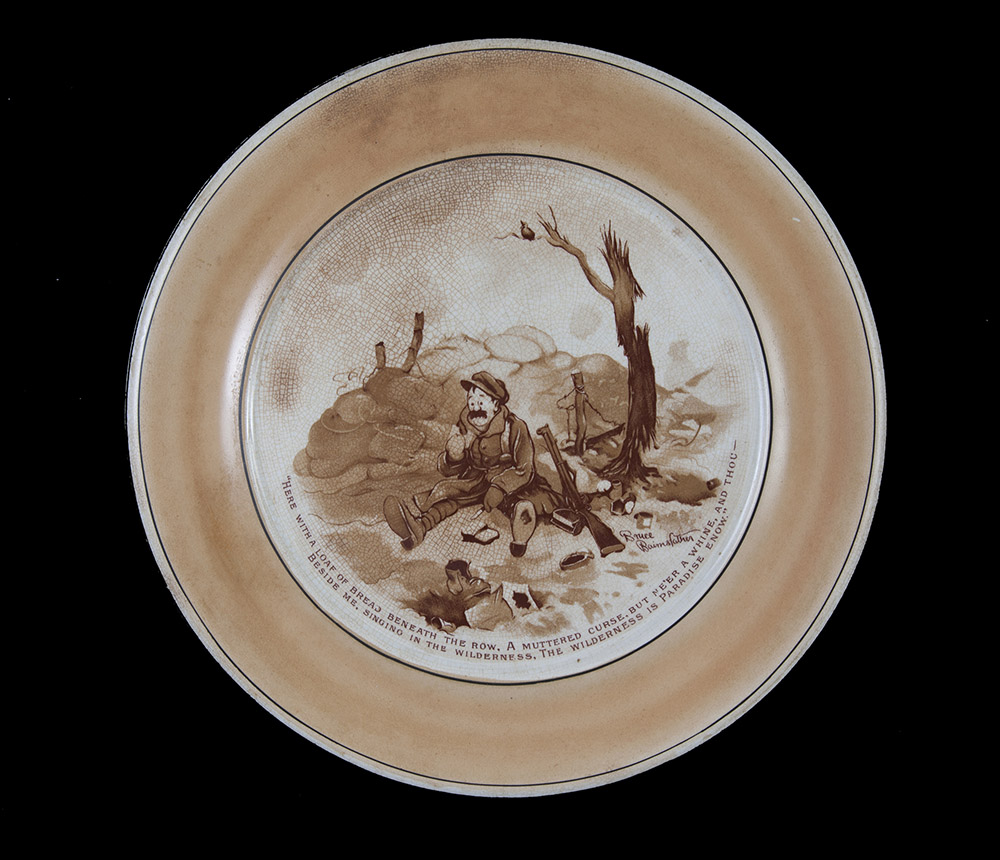 (Above, Left and Right) Bairnsfather Plates

These two plates contain satirical cartoon drawings depicting scenes and dialogue concerning themes surrounding the Great War and the soldiers and officers who fought through it. The images on the plates are replicas of scenes which were originally drawn by Bruce Bairnsfather, the well-known cartoonist and humourist. Born in India into a military family, Bairnsfather intended to follow in the family tradition of military service. However, after several failed entrance exams into military schools, he attended art school and started a career as a lighting engineer. At the outbreak of the war, he enlisted in the Royal Warwickshire Regiment and served on the Western Front, where he was hospitalised with shell-shock and hearing damage during the Second Battle of Ypres in 1915.

During his recuperation, Bairnsfather had several of his sketches and drawings published in the weekly magazine, The Bystander. The subject of his sketches often focused on what life was truly like in the trenches. He used satire and dark humour to make what was a difficult subject matter more relatable and understandable to the public back in Britain. Many of his drawings were gathered into two publications at this time: Fragments from France (1914) and Bullets and Billets (1916).  One of the most famous characters featured in his drawings was a curmudgeonly soldier who had a walrus moustache and wore a balaclava, known as ‘Old Bill’. One of Bairnsfather’s most famous cartoons is shown on one of the plates featured here. The cartoon shows ‘Old Bill’ in a foxhole telling his comrade, “Well, if you knows of a better ‘ole, go to it”. It is also believed that the public affection for ‘Old Bill’ led to the term being used to describe the police force in Britain, as many of its members at the time wore similar moustaches to Bairnfather’s character. Though initially viewed as vulgar by many, the popularity and morale-boosting effects of his cartoons ensured Bairnsfather received a position in the War Office for the rest of the war producing similar cartoons for other Allied forces. He would also serve as the official cartoonist for American forces in Europe during the Second World War. 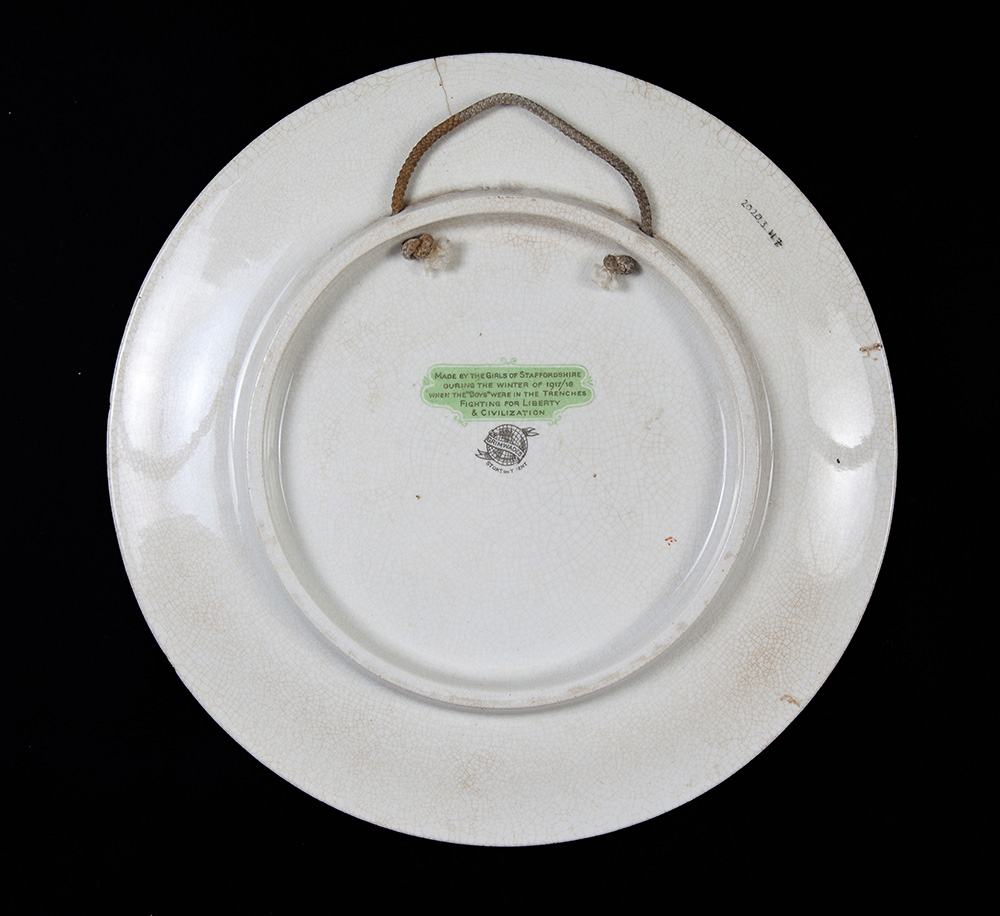 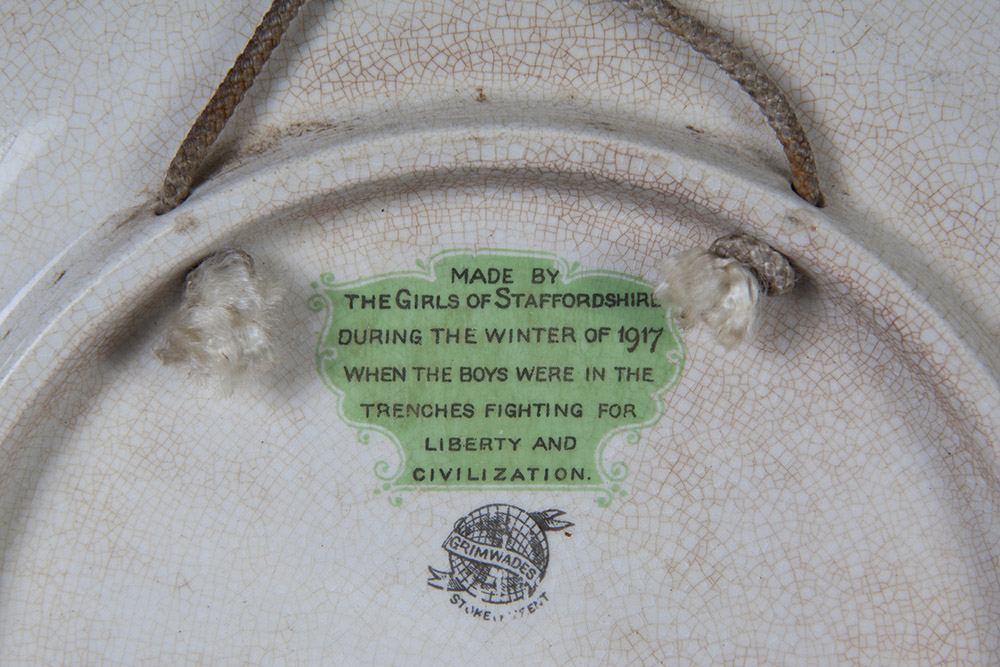 (Above Left) Rear of one of the Bairnfather's Plate

While these plates display the works of Bruce Bairnsfather, the drawings were not applied directly by Bairnsfather himself. The Bystander, the magazine which printed Bairnsfather’s drawings, granted a company known as “Grimwades Limited of Stoke on Trent” special permission to reproduce Bairnsfather’s iconic images onto various items of pottery, including butter dishes, plates and tobacco jars. These specially produced Grimwades Bairnsfather Ware pottery pieces started production during the war in 1917, but may have been produced until as late as the 1950’s. The plates here have the words “MADE BY THE GIRLS OF STAFFORDSHIRE DURING THE WINTER OF 1917 [/18] WHEN THE “BOYS” WERE IN THE TRENCHES FIGHTING FOR LIBERTY & CIVILISATION” displayed on the back. This text shows that these particular plates were some of the earliest produced. The “Girls of Staffordshire” is a reference to the Staffordshire factory in which these plates were made.

Article discussing the life and work of Bruce Bairnsfather.

Special thanks to Hannah Bernarius, student of 2021 MA Museum Studies - Archaeology Department UCC for her research on this object. Thanks to Gerry White for helping edit this piece.