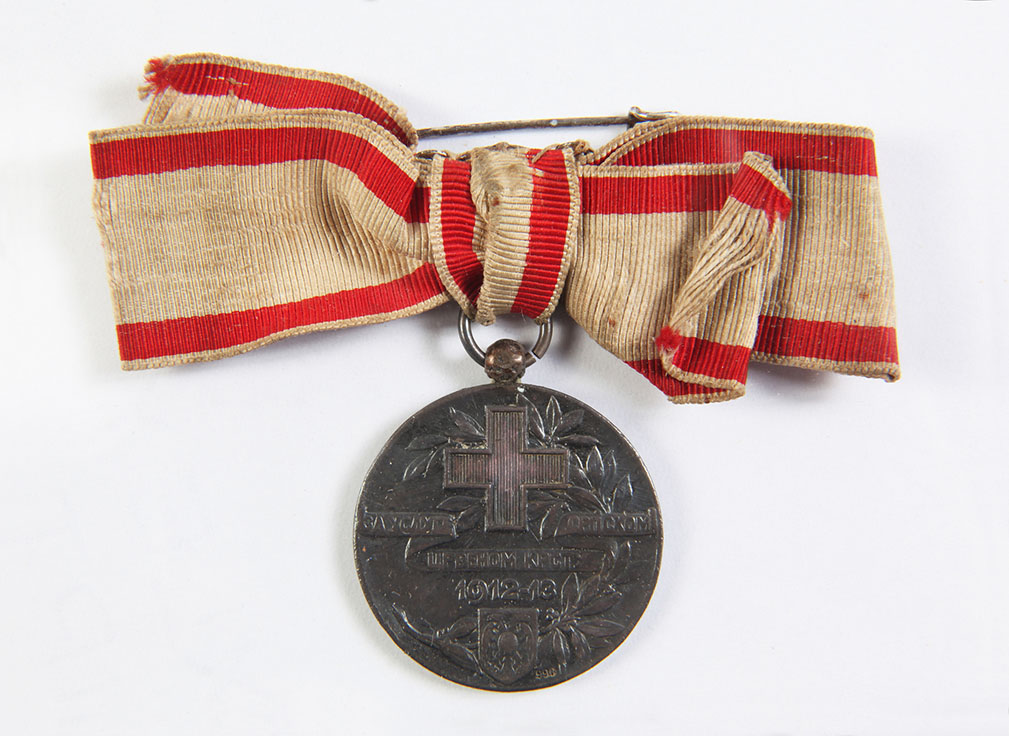 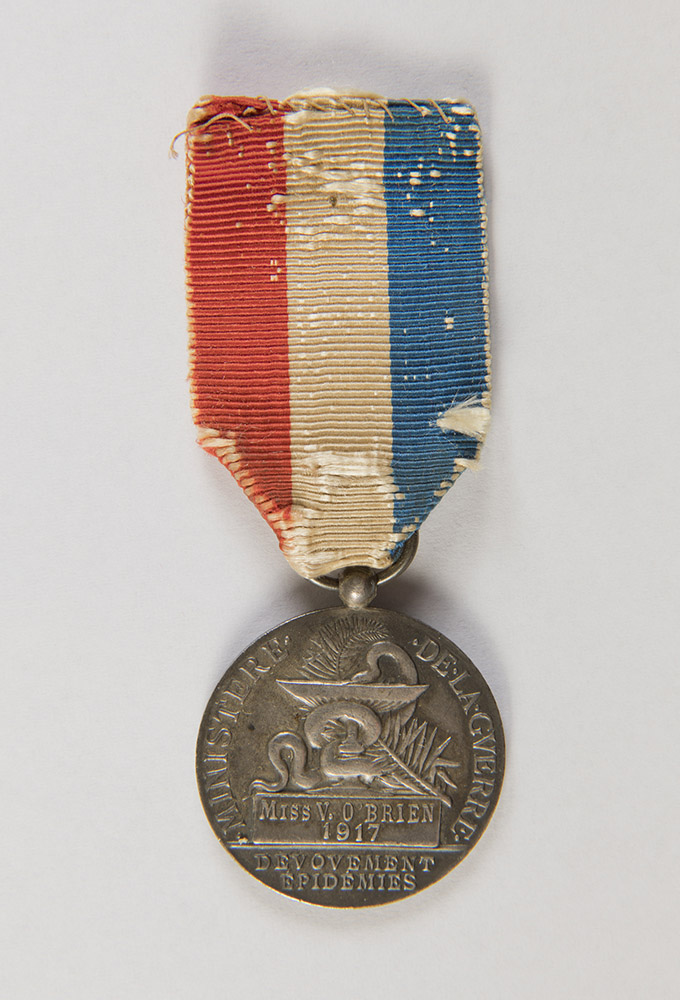 (Above Right)  French Medal for Epidemics

These two medals awarded to Violet O’Brien allows us to explore her impressive nursing career during the Great War. They also serve as powerful reminders of the important and often forgotten role women played during the conflict. Violet’s story is a powerful example of a woman who dedicated her life to helping people, both during and after the war, and did so until her death in 1952.

A brief overview of the life of Violet O’Brien

O’Brien grew up in a family of medical professionals. Both her father and brother trained as doctors at University College Cork and served in the Indian Medical Service (IMS). The IMS, which operated until Indian independence in 1947, serving during both World Wars. It is believed that Violet was born in 1890 during her father’s service in India. Little concrete is known about her early life, but we do know that she received her nursing training at the North Infirmary Hospital in Cork.

O’Brien then moved to London to work and while there joined the Suffragette Society, a movement that sought to establish the vote for women. She was arrested and imprisoned for performing acts of militancy in 1909. She went on hunger strike, was force fed at least twice and was awarded the Suffragette Medal for her efforts.

O’Brien volunteered and served in Serbia (1915) and France (1917) tending to the wounded and dying soldiers. Despite the horrendous working conditions, O’Brien and her fellow nurses preserved and performed their duties diligently, bringing comfort and relief to the men who had been through the carnage of war.

After the war, she returned to Cork where she continued to work in the service of others. She was especially committed to working with children and expectant mothers. Up to a few months before her death in 1952, she had been secretary of the Cork Child Welfare League. 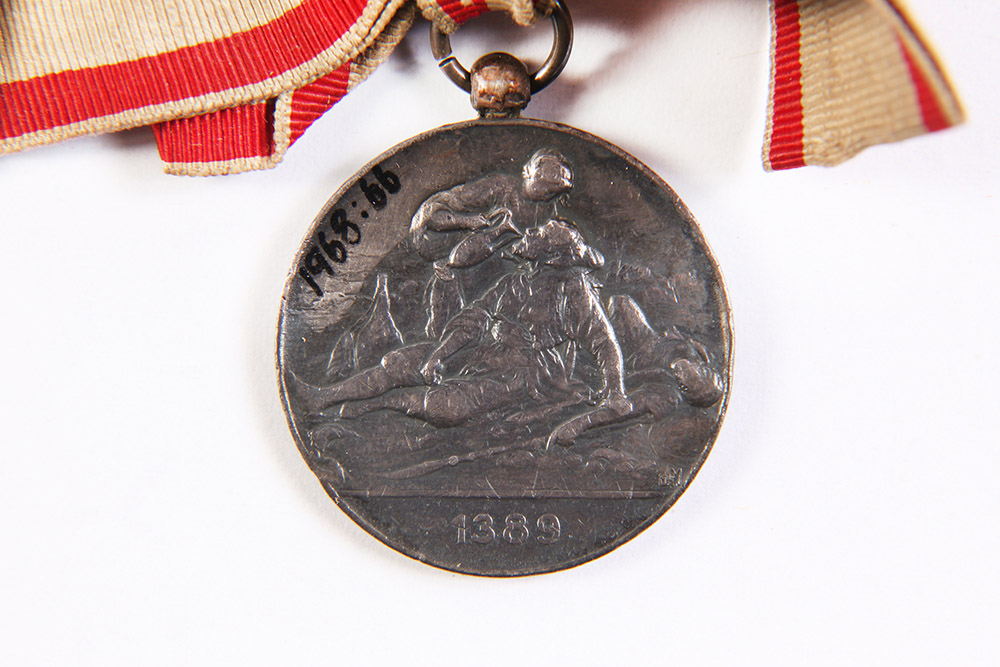 O’Brien left London on August 12th, 1914, eight days after the declaration of war, with 36 other volunteer nurses, bound for Serbia. They based themselves in the city of Kragujevac where the nurses set about running a hospital in appalling conditions. Though the British Red Cross has been operating in Serbia since 1876, they made massive medical contributions during the First Balkan War in Serbia, (1912-1913) and the subsequent Great War. Instituted in 1912, the Medal of Merit was awarded by the Board of the Red Cross Society for exceptional merit and services rendered to the Serbian Red Cross, and for care and assistance to the sick and wounded. It was awarded in two classes; silver and bronze.

The image on the obverse side is an interpretation of a painting by Uroš Predić, inspired by cjaracters from a Serbian epic poem. The woman is the Maid of Kosovo and she is tending to a dying soldier named Pavle Orlović.  The year indicated, 1389, is the year of the Battle of Kosovo, a key historic event for the nation of Serbia. This image has since been criticised for belittling the woman’s role in comparison to the male sacrifice, however, regardless of its historical context, it certainly acts as a reminder of the crucial contribution the red cross nurses made to the Serbian army during some dark times. 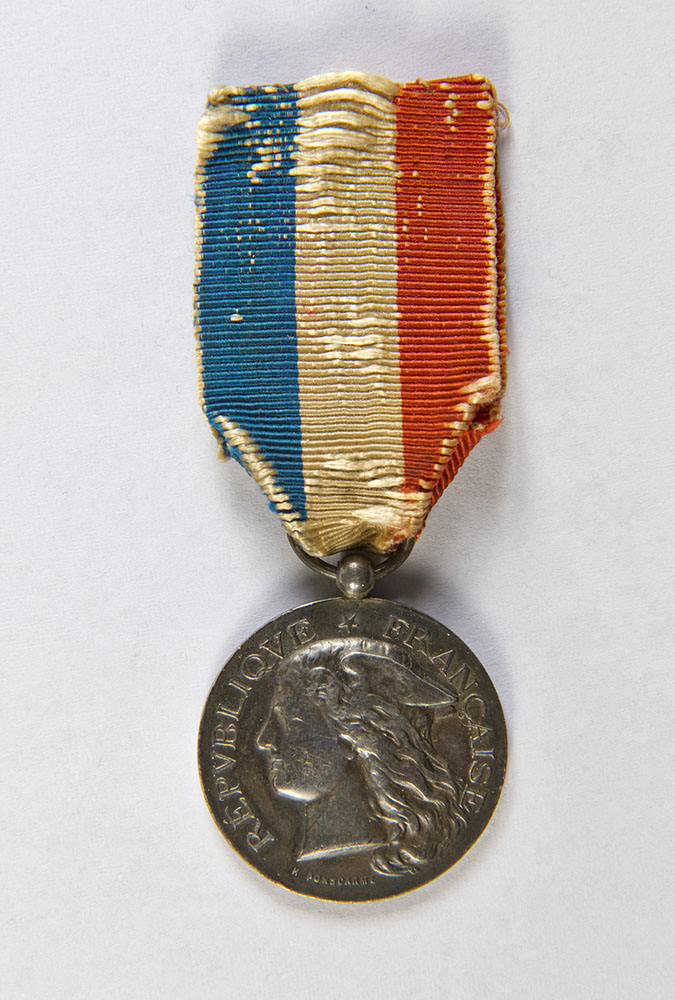 (Above, Left and Right) Violet O'Brien's French Medal for Epidemics. (Front and Reverse)

The Ministry of War Medal of Honour for Epidemics was created by the Department of Commerce in 1885 following the cholera epidemic of 1884 and was issued to honour those who provided medical treatment to the infected. As a member of the Voluntary Aid Dispatchments (VAD), Violet, along with many other volunteer nurses were dispatched to British Auxiliary Hospitals abroad. Violet was placed in France. The epidemic of 1917 in France could refer to the rapid spread of the measles or the spike in purulent bronchitis cases or the disease that would become known as the Spanish Flu.

On the obverse side, Marianne, the National personification of the French Republic who is associated as the Goddess of Liberty is used to symbolise the strength and dedication of these nurses and to add a sense of national pride. The medal is also suspended from a ribbon that represents the French national flag. The French symbolism is used to mark the particular event that these women contributed to and therefore demonstrates the effort that went into ensuring that these nurses were specifically honoured for this contribution rather than with a general war effort medal.

On the reverse side is the Bowl of Hygieia, a Greek symbol of pharmacy and is used to directly represent the nurses’ specific medical skills. The accompanying laurel branch indicates victory. The medal is highly considerate of the key role women played in facing the many medical consequences caused by the Great War.

Special thanks to Deirbhile Lynch, student of 2021 MA Museum Studies - Archaeology Department UCC for her research on this object. Thanks to Gerry White for helping edit this piece.