This is a skull and antler fromMegaloceros, more commonly known as the Giant Irish Deer. It was found in Cork during the building of Wilton Roundabout in 1993.

The Giant Irish Deer is the largest known species of deer to have ever existed, standing at up to two metres in height. Adult males, or stags, would have weighed about a ton, while the females, or hinds, were about half a ton. The species is perhaps most famous for its colossal antlers, which could span up to four metres in width and weigh up to 45kg. The Giant Irish Deer’s name is somewhat misleading, as this species of deer was not unique to Ireland with fossil remains known from all across Europe and as far afield as Central Asia. Ireland, however, boasts both the best-preserved finds and the largest collection, and this is how this species gets its Irish-orientated name from. Ireland has its bogs to thank for many of its best fossil finds, with over 100 skull and antlers coming Ballybetah Bog, near Dublin, alone. 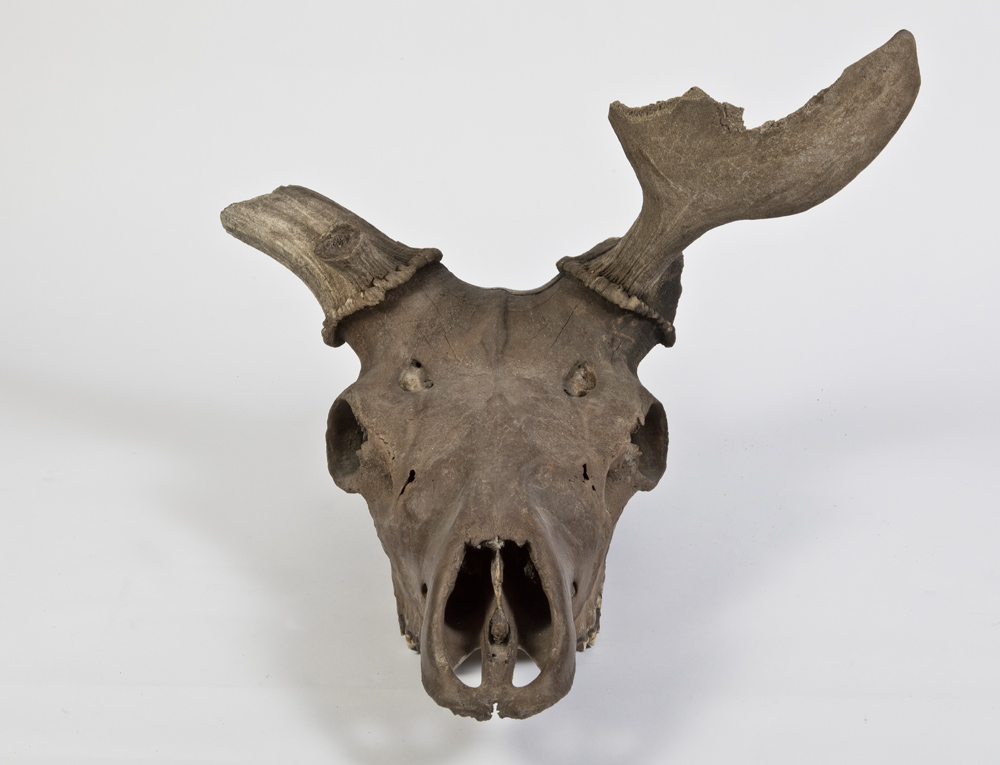 The Giant Irish Deer first appeared during the glacial period of the last one million years or so, in climatic conditions similar to those of today. In Ireland, these deer are thought to have been especially numerous in the midlands and eastern parts of the country, which was predominantly open grasslands with ideal space and vegetation. However, approximately 12,000 years ago, a rapid cooling of the climate saw glaciers advancing across Ireland, which led to extreme changes in temperature and vegetation across the country. The Giant Deer were unable to adapt to these changes, nor could they migrate given Ireland’s island status, and by around 11,000 years ago they had become extinct in Ireland. This extinction was only a local one, however, as in other parts of Europe Giant Deer were able to migrate to warmer areas with enough food. It is unclear when the Giant Deer went completely extinct, and it is possible they survived into historical times in continental Europe. Hunting is thought to be one of the main factors in the Giant Deer’s extinction on the continent.