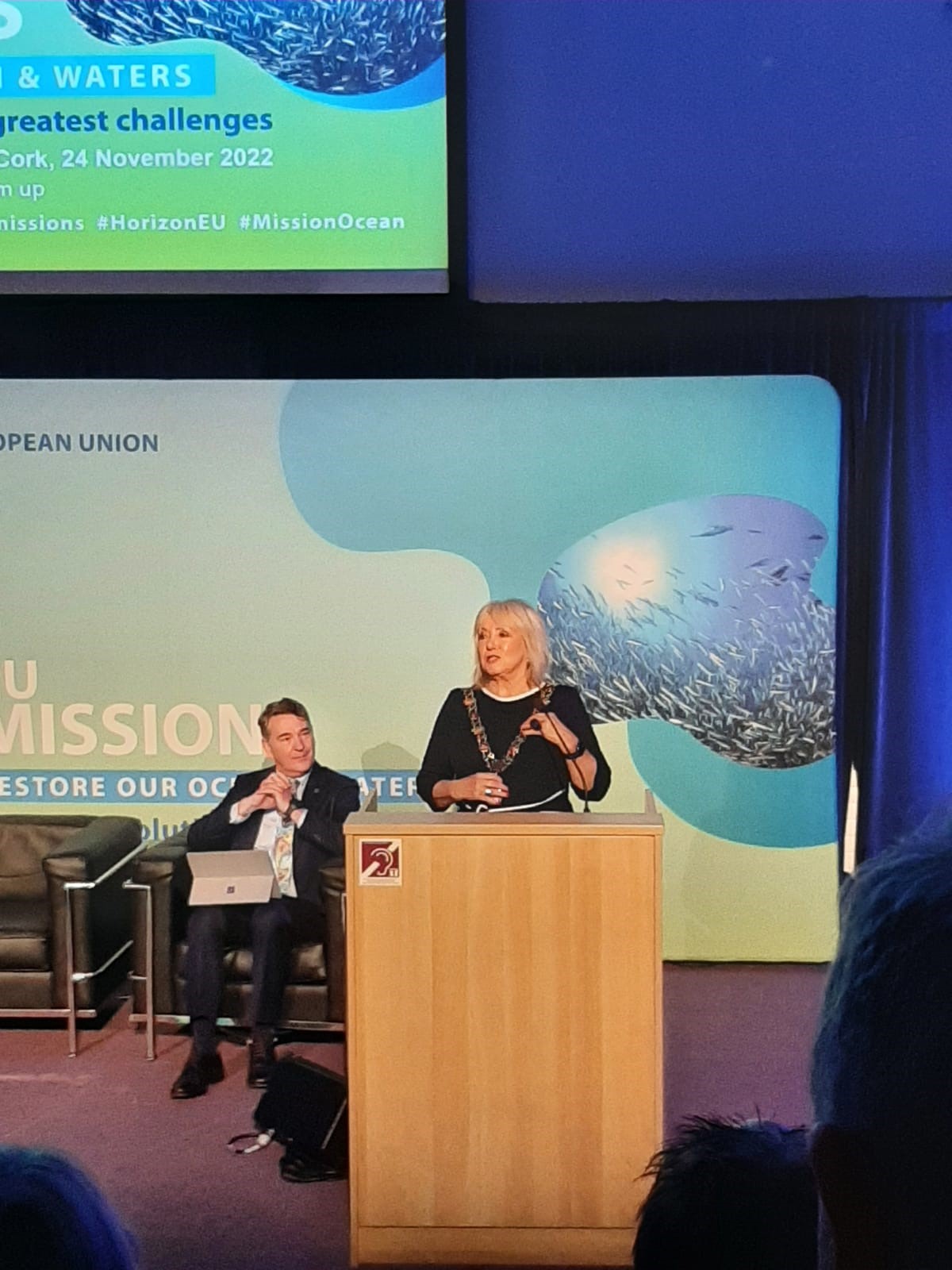 Cork City has become the first Atlantic-Arctic city to sign the EU Mission Ocean Charter at a European Union conference held in the National Maritime College of Ireland in Ringaskiddy this week, leading the way in the journey to restoring our oceans and waters natural ecosystems, working towards eliminating pollution and developing a sustainable blue economy.  Lord Mayor of Cork Cllr. Deirdre Forde was in attendance at the event, which was the high-level kick off to the Atlantic/Arctic "lighthouse", focusing on actions to implement the Mission.

The EU Commission has launched several “Missions” on critical areas to bring concrete solutions to some of the great challenges facing us – in concept, similar to the US Moon Mission in the 1960s.  The Missions are focused on themes such as cities, soils, cancer and oceans. They are aimed to be bold, focused on citizens and stakeholders and these Missions are well funded.  The Mission Ocean will help achieve the marine and freshwater targets of the EU Green Deal such as protecting 30% of the EU's sea area and restoring marine eco-systems.

This Mission is split by Sea Basins – called "lighthouses", and Ireland is a central player in the Atlantic Arctic lighthouse - a lighthouse is meant to symbolically show us the way.  Mission Ocean’s objectives are the objectives are to (I) protect and restore marine and freshwater biodiversity and ecosystems, (II) eliminate pollution, (III) develop a blue economy, carbon neutral and circular.

Lord Mayor of Cork, Cllr. Deirdre Forde said, "Cork City is proud to be the first Irish city to step up to the challenge of signing the Oceans & Waters Mission Charter and in maritime parlance – nail our colours to the mast, by playing a meaningful leadership role in contributing to the realisation of its objectives.

"To do so, we are redefining our relationship with our waters by establishing a programme of action centred on efforts to truly embrace the River Lee and the Inner Harbour as never before. This is an illustration of our intent to significantly engage with residents of the city, not only to raise awareness of the importance, and the fragility, of these aquatic assets but to facilitate active participation in how they are managed and used in a sustainable sense.

John Bell, Director Healthy Planet at the EU Commission's Directorate General for Research and Innovation and co-leader of the Mission Ocean said,"The European Union has come to Cork to launch the new Mission Ocean.  Mission Ocean is a new 'moon-shot' to bring our ocean and water systems back to health.  The journey will be driven by research innovation and science to produce a new future and like many great journeys, it's the beginning of a new future for our ocean, harnessing the power of communities, science and innovation to transform nature, to restore the ocean ecosystems and to ensure that there's a future for the blue economy around this great Atlantic region.  Ireland is an ocean superpower when it comes to its waters and its potential so this is a very promising moment when we start to find solutions to some of the great problems that we face moving forward as part of the European Union's Green Deal."