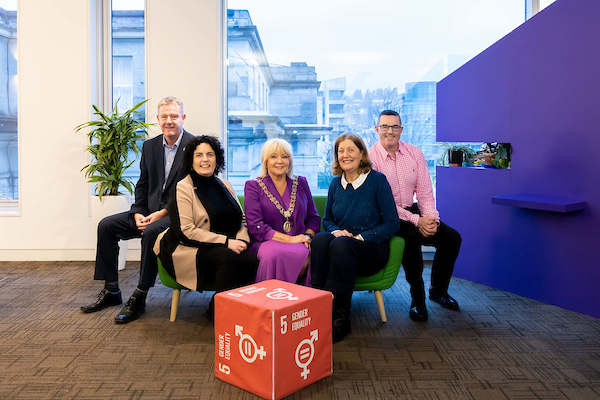 Award-winning screen and stage writer, author and director, Stefanie Preissner will MC a conference ‘Pathways to Participation’ - Attracting and Sustaining Women as Leaders in Communities, Politics and Business’ at Cork City Hall next week, Tuesday November 22.

Organised on behalf of Cork City Council’s Women’s Caucus and in collaboration with Women for Election, speakers will address challenges and opportunities faced by women across communities, politics and business and how to rebalance power in these spheres so that women, of all backgrounds, have a stronger voice and greater influence.

A keynote speech will be delivered by Mary Crilly, CEO of the Cork Sexual Violence Centre, feminist activist and the 2022 Freedom of Cork City recipient for “her tireless work in raising awareness of the prevalence of sexual violence, encouraging two-way dialogue with younger people, and working with government, statutory and voluntary agencies to change and influence social policy”.

The second keynote will be given by Kimberly Ellis, Director of the Department on Status for Women in San Francisco. Named the most powerful unelected person in California Democratic politics by the Sacramento Bee, Kimberly Ellis is a former Executive Director of Emerge California, which trains Democratic women leaders to run for elected office and win. Ellis is frequently interviewed by leading political media outlets, including the New York Times, Washington Post, and Associated Press

Lord Mayor of Cork, Cllr Deirdre Forde, Minister for State at the Department of Housing, Planning and Local Government, Peter Burke TD, Chair of the Women’s Caucus, Cllr Mary Rose Desmond, CEO of Women for Election, Catriona Gleeson and Dell Technologies Vice President, Bob Savage will also speak at the conference, which is  supported by the Department of Housing, Local Government & Heritage.

Lord Mayor of Cork, Cllr Deirdre Forde said: “ The upcoming conference will bring women and men from diverse backgrounds and from political & non-political forums together to take a hard and honest look at the systemic barriers and fears that stop many women from believing in themselves and putting themselves forward. We are making a real effort to encourage as many people as possible, both women and men, to attend this conference as the challenge of rebalancing power - so that women are represented in decision making - is not going away".

Chair of the Women’s Caucus, Cllr Mary Rose Desmond said : “The conference will also see the launch of Caucus-commissioned research,  “Women’s Voices in the Council Chamber” by Dr. Aodh Quinlivan, Director of the Centre for Local and Regional Governance at UCC.  We are also delighted that Caitriona Gleeson, CEO of Women for Election and Louise Purcell, Assistant Principal Officer at the Department of Housing, Planning and Local Government will speak about their work to inspire and equip more women to enter and succeed in Irish politics and the ongoing need to advocate for systemic changes”.

‘Pathways to Participation’ - Attracting and Sustaining Women as Leaders in Communities, Politics and Business’  will take place on Tuesday, November 22nd from 10am to 2pm, at Concert Hall, Cork City Hall.

Cork City Council’s Women’s Caucus was established to increase women’s engagement and representation in local politics. The public is invited to attend by booking on Eventbrite.