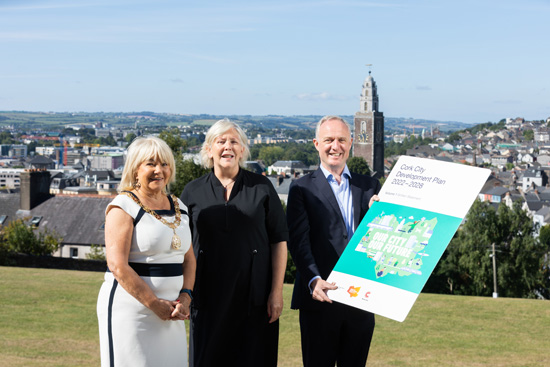 “Our City, Our Future - Cork City Development Plan 2022-2028”, has been launched by Lord Mayor of Cork, Cllr. Deirdre Forde.  The plan, which came into effect this month, provides an overarching framework to help shape the transformation of the City over the next six years by supporting a predicted population increase of 50,000 and the creation of 30,000 jobs.

‘Our City, Our Future’ provides an exciting plan for Cork as the city embarks upon an exciting phase of growth and change – with sustainability, quality of life, social inclusion, and climate resilience at the plan’s core.  1,800 submissions were received during the public consultation phases of the plan, as well as the creative submissions of over 1,000 children and young people in Cork city who took part in the innovative consultation process “Freedom of the City”, organised in 2021 by the Glucksman Gallery in partnership with Cork City Council and UCC’s Centre for Planning Education and Research. Primary and secondary school students were invited to explore creative approaches to civic life and express their ideas for a healthier, greener and more playful city, which formed a formal submission to the plan.

Lord Mayor of Cork, Cllr Deirdre Forde said: “The process of making a Development Plan was set up in such a way to make it truly the people’s plan, reflecting their vision for the city of the future.   This plan sets out how we can achieve the ambitions of the people of Cork, providing homes and jobs, making it a greener, more sustainable and more vibrant place to live in.  I thank all who participated in the public consultation process.”

“It is the first of three City Development Plans that will provide a framework to achieving a 50%-60% increase in population by 2040 so that Cork grows as a city of international scale, as designated in the National Planning Framework.  It is centred around supporting housing, job creation, public realm renewal, transport, more amenity spaces and community services in existing built-up areas, using the internationally recognised 15-minute city model”.

Cork City Council Chief Executive, Ann Doherty said: “I’m delighted to see this plan launched, knowing that so much work has been put in by the planners at City Hall and the Elected Members, ensuring that all aspects of it were thoroughly reviewed to ensure a futureproofed, sustainable development of the city into the next six years and beyond.”

“Cork City is changing and growing, this is evident when you walk the streets of our city. How that change and growth are managed and received will seek to enhance quality of life for all those who live and work in Cork.  It is against this backdrop that the City Development Plan 2022 – 2028 now must be seen. The plan does not stand alone but sits within a suite of Strategic Plans like the National Planning Framework, Project Ireland 2040, along with the significant capital expenditure set out in the National Development Plan, which recognises Cork’s status as an emerging international city of scale and a national driver of economic growth.”

To coincide with the enactment of the Cork City Development Plan, Cork City Council has today launched its official LinkedIn page. To keep up to date with strategic news, current vacancies, and more please follow us here.

Cork City Development Plan 2022-2028 can be viewed at www.corkcitydevelopmentplan.ie