Barry M. Egan Manuscript: Eyewitness to the Burning of Cork

Barry M. Egan TD (b1879 - d1954) was the proprietor of William Egan & Sons Jewellers and Silversmiths, Patrick Street, which was destroyed in the Burning of Cork 11-12 Dec 1920. Egan was co-opted as a Sinn Fein City Councillor in January 1920 acted as the Deputy Lord Mayor for a period in 1920. In March 1921 he wrote down in detail his recollection of the events up to and during the Burning of Cork. 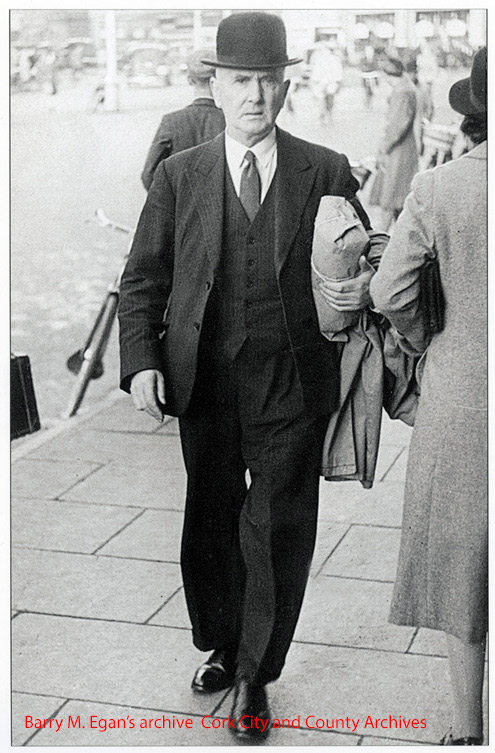 The following is an extract from the transcript of the manuscript:

December 11 The Burning of Cork

About 10.30 that night we saw a terrific glare of fire…about 12 midnight it had subsided…In the morning some of our staff came down to say half Patrick St was burnt out & still blazing…a lot of shooting by drunken Black and Tans going on. We started in but were turned back by refugees, running out of town from the fire & the shooting. At 10.30 we went in. King Street was full of Black & Tans, dishevelled, dirty, drunken, carrying rifles and revolvers, some with caps down over their eyes, more with regulation police caps.

We walked through to Bridge St, & there we had the sight of our lives. From Merchant St. to Maylor St the block was still burning. Cash’s was in ruins. Thompsons Toy Shop..blazing furiously; every place west of that up to Victoria Hotel was in ruins. The street was cleared of Black & Tans. It was crowded with people. The fire brigade had a single hose on one building- Wolfes drapery shop, blazing away. 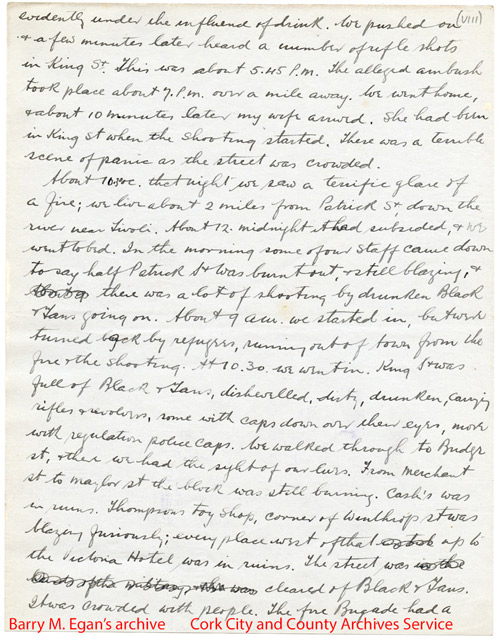 The effort was pathetic. Hoses were lying around the street- cut. The Brigade was in the last stages of exhaustion….The military fire brigade remained in the barracks….idle. The British Army looked on the whole night through- they were directly over it, on top of Patrick’s Hill. Numbers of officers came down to the town to get a better view…

…At 7.30 am Wm Egan and Sons Ltd was a heap of ruined smoking ashes. It went down with all it held & gave up nothing to the enemy. The fire at the back caught the woodwork of back windows & ran through the whole place. In such a fashion was the work of a hundred years in a few short hours laid in ruins. The life work of three generations apparently destroyed. The mainstay of fifty or sixty families broken.