Message from the Lord Mayor of Cork, Cllr. Joe Kavanagh

Message from the Lord Mayor of Cork, Cllr. Joe Kavanagh

It is remarkable that 100 years on from the tumultuous events of 1920 that this centenary year has  proven to be another where lives and plans for the future have been torn down by a global pandemic that we didn’t anticipate at the end of last year. 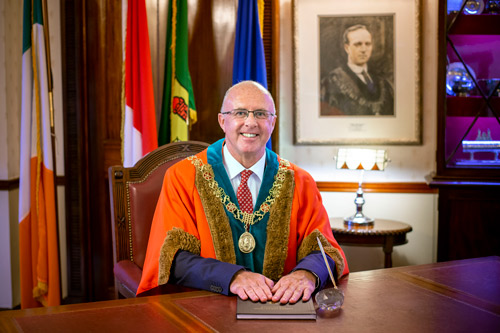 The notorious burning of the city on December 11/12 1920 saw vast tracts of the city centre, including City Hall and the Carnegie Library, reduced to smouldering ashes by Auxiliaries following the death of one of their comrades in an ambush by the IRA earlier that day.

The torching of the city destroyed 40-50 buildings, seriously damaged at least 200 more and left another 2,000 people unemployed and many homeless afterwards. Over five acres of the city centre was set alight.

It must be remembered that this night of terror and chaos came at the close of a tumultuous year when two of the city’s Lord Mayors had been killed: Lord Mayor Tomas Mac Curtain was killed by Crown forces in his family home in March while Lord Mayor Terence MacSwiney died on hunger strike in Brixton Prison just eight months later.

Unfortunately, much of Cork City’s planned commemorative events had to be shelved due to Covid-19 public health guidelines. However, I strongly believe that this event needs to remembered and recognised sensitively, not only in the second city but across the country.