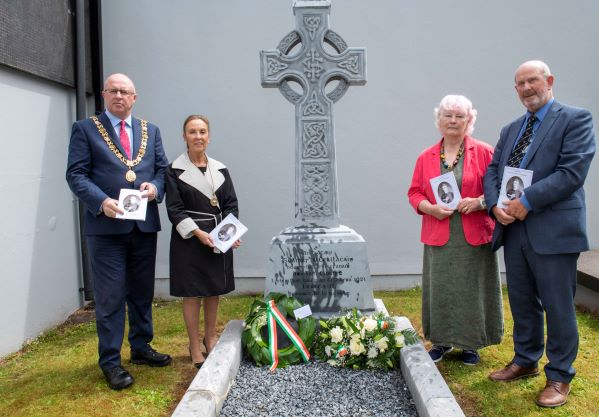 On Saturday 15th May 2021, the Lord Mayor of Cork, Cllr. Joe Kavanagh and Lady Mayoress Stephanie Kavanagh laid a commemorative wreath on the grave of Father James (Seamus) O’Callaghan in Clogheen.  Father O’Callaghan was a parish priest shot dead by the Black and Tans in 1921 in a case of mistaken identity. The wreath laying took place in the cemetery of the Church of the Most Precious Blood, Clogheen, Father O’Callaghan’s former parish. Fr. James' grandniece, Mary Healy (from Cloghroe) also laid a wreath accompanied by her husband Donal Healy.  A commemorative mass was concelebrated by Rt. Rev. Mons. Kevin O'Callaghan; Very Rev. Canon Richard Hurley and Very Rev. Fr. Gregory Howard, Administrator, Clogheen.

Father O’Callaghan had been staying in the home of Liam de Róiste, the prominent Sinn Féin politician, in Upper Janemount, Sunday’s Well, when the house was stormed by the Black and Tans in the early hours of May 15th, 1921.   In the weeks prior to this, de Róiste had taken to sleeping in a location away from his home, fearing an attempt on his life by British Forces.  Father O’Callaghan went to investigate the disturbance, telling the soldiers that de Róiste was not in the building.  His pleas fell on deaf ears, however, and he was gunned down.  He was taken to the North Infirmary at 4.15 a.m. but died from his wounds that evening at 6 p.m.

On Monday 17th May, Mary Healy, grandniece of Father O’Callaghan, donated the jacket he wore on the night he was killed to Cork Public Museum on behalf of his family, bullet hole and bloodstain still visible.  The Lord Mayor accepted the artefact on behalf of the people of Cork. 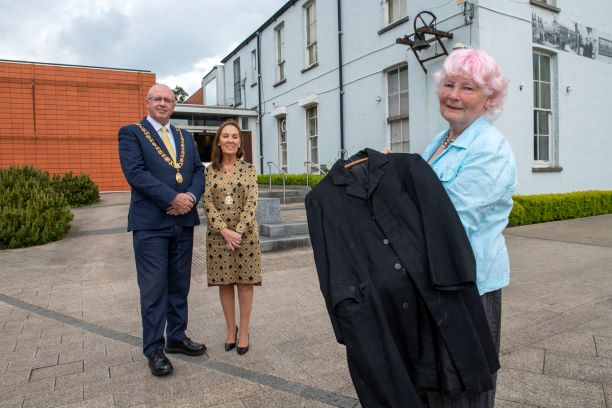 The Lord Mayor said: “We often think of 1921 in terms of the famous patriot figures whose names appear in our school history books, but the loss of civilian life is rarely given as much thought. Father James O’Callaghan was innocent victim of the conflict, a beloved parish priest shot dead by Crown Forces in a case of mistaken identity, but the impact of his untimely death on his family, friends and locality was felt as keenly as any.  I’m most gratified to be given the opportunity to honour his memory.”