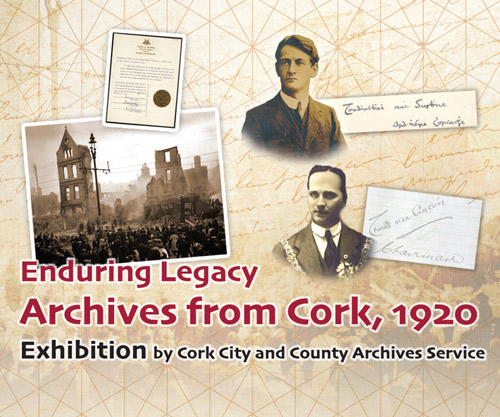 Local archives from 1920 are uncommon, as much was lost or destroyed, some perhaps lost in the destruction of City Hall in the Burning of Cork by Crown Forces in December 1920. Those that do survive, such as the original 1920 City Council Minute Book, and City Councillor and Irish Volunteer leader Liam de Róiste’s archive, are unique, invaluable historical and cultural artefacts.

Cork City and County Archives Service is delighted to present an exhibition of a selection of surviving unique original local archives and documents from 1920, touching on various events and themes, including the first election in which women had the vote and also the first to use proportional representation, the election of the first republican dominated City Council, the election of the first republican Lord Mayor, Tomás Mac Curtain, and the pledge by the new Council of allegiance to Dáil Éireann, the assassination of Tomás Mac Curtain, the election of Terence MacSwiney and his subsequent death on hunger strike, and the Burning of Cork and the immediate reconstruction efforts, as well as the escalation of the Anglo-Irish conflict both militarily and politically in 1920.